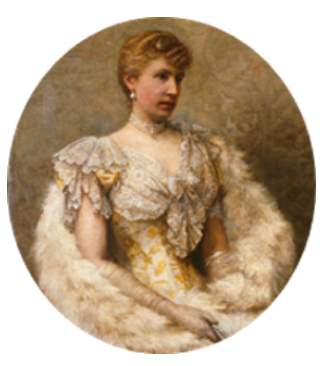 She was born Marie Alice Heine on February 10, 1857, in the French Quarter of New Orleans to Michel Heine and Amélie Marie Céleste Miltenberger. She had two younger siblings.  Her father was a French businessman who came from a prominent German banking family and a cousin of the famous German poet, Heinrich Heine.

After the American Civil War in 1874, the family returned to France and quickly became an integral part of Parisian society.  The young and beautiful Alice married Armand Chapelle de Jumilhac, 7th Duke of Richelieu, in 1875.  The couple had two children, but tragically, in June 1880, the Duke died while on a trip to Athens.  Widowed at just 22 years-old, Alice became a very wealthy woman and established herself as one of the leading hostesses in European society. 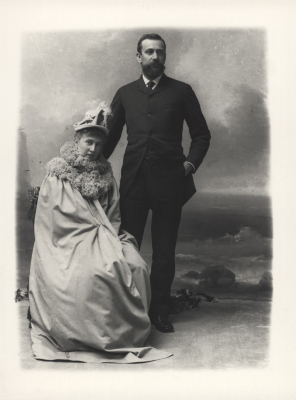 Prince Albert I with Princess Alice in Paris
c. 1889
​(c) DR-APPM
In the winter of 1879, on the island of Madeira, she met Prince Albert I, the future Sovereign of Monaco, a passionate oceanographer who came to the island aboard his schooner, L'Hirondelle.  The Prince later wrote, “If the view of Madeira moves me so, it is because it was there that my destiny was forever changed… There in 1879, I met Alice, Duchess of Richelieu, and soon thereafter we began the affectionate courtship that led to our marriage.”  They married on October 30, 1889 in Paris and officially arrived in Monaco on January 12, 1890, where they were greeted with much fanfare.

Well-connected to the great intellectuals, artists, musicians, and other influential people of the day, Princess Alice was instrumental in the development of Monaco as a cultural hotspot in Europe.  She was also very active in promoting the newly opened Opéra de Monte-Carlo. Built and inaugurated in 1879, the Opéra de Monte-Carlo was designed by celebrated architect Charles Garnier, who also built the Opéra de Paris.

While her husband supported her efforts in the arts, Alice never fully understood Albert’s love of the sea and oceanography, which kept him away for long periods of time.  Their differences eventually drove the couple apart and they separated on May 30, 1902. Although legally separated, the Princely couple never divorced.

Alice settled in London where she became the hostess of one of its most glittering salons. She became a close friend of Queen Alexandra, wife of King Edward VII, and she entertained considerably.  She became patron to many young, promising artists and a supporter of humanitarian causes popular in the early twentieth century.

She died in Paris on December 22, 1925 and is buried at the Père Lachaise Cemetery.